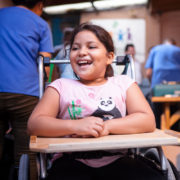 San Salvador, the capital city of El Salvador, is considered the deadliest city in the Western Hemisphere. Violence between gangs and police kills thousands every year, and often those affected are innocent.

Alicia was just a year old when she was caught in the crossfire between two gangs and shot, leaving her spinal cord injured and paralysed from the waist down. Now 8 years old, Alicia is an incredibly intelligent and independent little girl. When we met her, she was excited to practice her English with us and insisted on getting into her new chair unaided.

Alicia wanted more than anything to go to school. However, she could not; many schools in El Salvador refuse to accept children with disabilities on the basis of a lack of facilities and resources. For a competent and able childlike Alicia, for whom an education could truly open up a world of possibilities, this was something we could not accept.

When we returned to London, we worked with our local partner to ensure that we found a way to get Alicia into school. Thanks to her new functioning wheelchair, we were ecstatic to learn that a school took her and she is now receiving the education that she – and every child, no matter their circumstances – deserves. 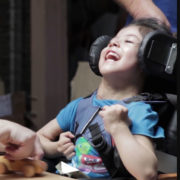 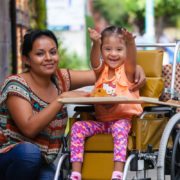