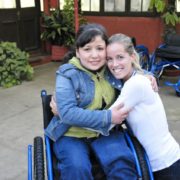 On 2 September 2011, Walkabout Foundation, represented by Carolina and her mother Monica, director Marissa Sackler, and summer fellow Katrin Alberding from Harvard Business School, travelled to Chile with the Gabriela Mistral Foundation to personally deliver 300 RoughRider wheelchairs to individuals affected by all different sorts of mobility disabilities and the February 2010 earthquake, the fifth strongest earthquake recorded in history.

The week began with a training session for local therapists, doctors, and physicians in San Bernardo and an opening ceremony attended by Joaquin Lavin, Chile’s Minister of Planning and Social Development, as well as representatives from the National Office of Disabilities and local authorities. In the ensuing day, we travelled up and down the country distributing wheelchairs throughout San Felipe, Valparaiso, Rancagua, Talca, Concepcion, and La Serena.

In each city we visited, we met the most remarkable people, like Martin, a young man in Rancagua, who pushed his old dilapidated wheelchair over 20 kilometers each day to work at a supermarket. In Valparaiso, we met Eduardo who is a double amputee and was selling Band-Aids on the street, and in Talca we met Solange, a 19-year-old paraplegic, who has lost a kidney, is deaf, and is also an orphan. She had the brightest smile and at the end of the day delighted at by dancing a “cueca” in her new RoughRider wheelchair as a way to say thank you.

In one week, the Walkabout Foundation was able to give 300 Chileans a new wheelchair and the possibility of living a more independent, productive, and fulfilling life.