One of the poorest countries in the world, Sierra Leone is still healing the scars of a brutal 10-year civil war which ended in 2002, leaving the country with overwhelming poverty.

In 2014, it saw its already fragile healthcare system collapse even further when it was struck by Ebola, causing a large number of international aid organisations to leave. Last year, it was hit by tragedy again, when flooding and mudslides killed over 1,000 people in the capital, Freetown.

The civil war alone left 1,600 living amputees, and the lack of aid and infrastructure in the country means that the need for wheelchair services is desperate.

Sierra Leone is a beautiful, green and mountainous country and yet considered one of the poorest in the world. It has suffered through a long, dark history of a 10 year civil war, followed by an Ebola epidemic, leaving the country in a stage of extreme poverty, but things are slowly changing for the better. […] 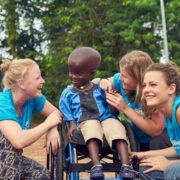 Sierra Leone is one of the poorest countries in the world, still trying to heal the scars of a brutal 10-year civil war which ended in 2002, leaving the country with a serious lack of infrastructure and overwhelming poverty. In 2014, it saw its already extremely fragile healthcare system collapse even further when it was […]

https://www.walkaboutfoundation.org/wp-content/uploads/2017/10/Untitled-2.jpg 1800 1800 Tiago Silva https://www.walkaboutfoundation.org/wp-content/uploads/2018/05/walkabout-foundation-logo-black.png Tiago Silva2017-10-09 16:48:592018-12-13 15:48:22Sierra Leone 2017
RwandaPrevious Country SudanNext Country
We use cookies on our website to personalize your experience and improve our efforts. By continuing, you agree to the terms of our Privacy Policy.I agree