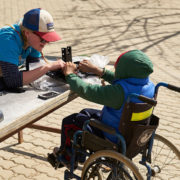 Siddanth is 12 years old, and lives in Nepal. He was injured in a road traffic accident when he was just 4. Because he had no wheelchair, his mother, unaware of the damage that it would do, kept him inside all the time – his father had left and she couldn’t afford to take him to school. When community outreach officers from our partner SIRC found him, he had multiple serious pressure sores, because he had been spending all his time lying in one room.

He was brought to the centre, where he received rehabilitation and treatment for his sores, and staff have made sure that he and his mother are staying in a hostel nearby so that he can attend school. Siddanth was clearly very shy when he arrived at the distribution (which is unsurprising, given that he has spent most of his life in just one room with his mother and has rarely interacted with others), but when he was asked to help put together one of the wheelchairs, he relaxed and enjoyed helping out. He especially loved the Coke and biscuit that he received as a reward! 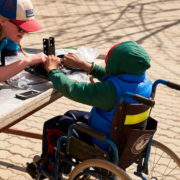 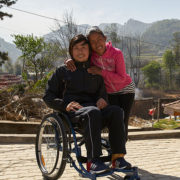 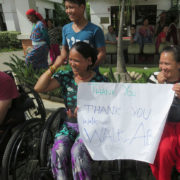 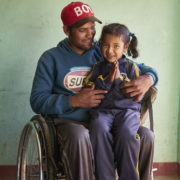