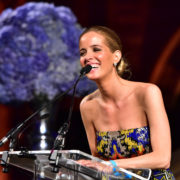 We are proud and humbled to announce that on June 27th 2015, we hosted our very first Walkabout Gala with President Bill Clinton as our keynote speaker, which raised over 1.5 million pounds (or 2.4 million dollars)!

The former US President attended the black tie event held at London’s Natural History Museum and delivered a moving speech praising our co-founders, brother and sister, Luis and Carolina Gonzalez-Bunster.

“When they started Walkabout, I was touched by the fact that they wanted to do two things that to me are highly compatible – paralysis research and empowering people in very poor places to beat the stigma that surrounds all kinds of physical disabilities” said President Clinton. He was joined by a host of stars, including Formula 1 driver Jenson Button, supermodel Natalia Vodianova, Prince Nikolaos and Princess Tatiana of Greece, actors Ed Westwick, Michelle Yeoh, Naomie Harris and Stephen Merchant, with TV presenter, Tania Bryer, acting as the evening’s host.

Afters three-course dinner in the spectacularly decorated dinosaur atrium, thanks to Polar Black Events, art expert Simon de Pury got the charity auction under way. Lots included lunch with Damien Hirst and the ultimate McLaren experience with Jenson himself.

A grateful Luis, who was left paralysed afters car accident in 1994, gave insight into his daily life, saying it had taken him “several hours to shower, dress and prepare himself” for the night, and that his suffering could not compare to what “the handicapped poor of the world must endure.”

The evening, which ended with an energetic performance by Chic star Nile Rodgers, will change the lives of thousands and help to make a reality the first Walkabout therapy and vocational training centre in Haiti.