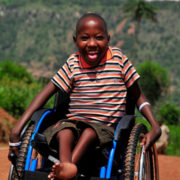 Last week Walkabout Foundation returned from its first trip to Rwanda with one Kinyarwandan phrase we will never forget “seka cyane”, which means “big smiles” and big smiles were exactly what we were greeted with everywhere we went. Walkabout delivered 250 wheelchairs to be distributed to people with mobility disabilities in Rwanda with the help of Partners in Health. While in Rwanda, Walkabout fitted over 20 individuals to their new wheelchairs. Here are some of the life changing stories you helped make happen.

We started our trip at Rwinkwavu hospital on April 27th, 1.5 hours from Kigali, with a two and a half day training program that taught seven PIH therapists and doctors from different districts how to fit and adjust the Rough Rider wheelchairs and how to give the best care to patients with physical disabilities, particularly spinal cord injuries.

With the successful completion of the training program, word spread around the villages and communities that Walkabout was at PIH distributing and donating wheelchairs. Before we knew it, we had lines of people showing up that had travelled hours and hours to be fitted into their new wheelchairs. One of those visitors was Frank! Frank has the biggest smile you’ve ever seen. He was born with a congenital birth defect which left him without the use of his legs. With no access to a wheelchair, Frank has spent the last 12 years dragging himself along the ground in order to attend school.

Despite such hardship Frank has a constant grin on his face and an infectious giggle. Once fitted in his wheelchair, Frank proved to be a natural at pushing himself around. Having discovered the extraordinary fre.om of mobility that his first wheelchair can bring him, the joy and hope on his face was overwhelming and priceless. The first thing that struck us about Solange was how neatly and professionally dressed she was, which is no small feat for a woman who arrived at PIH dragging herself along the dirt road. Her left knee had a make-shift pad strapped around it to soften the impact of the ground as she dragged herself on the street.

Solange was also born with a congenital birth defect that to a large growth protruding from her left leg as you can see in the photo. Furthermore, her legs never actually grew and have no strength or muscle, which has left with the inability to walk.

Solange was slightly shy at first but once in her wheelchair, she could not contain her delight, and when she finally headed home in her new chair, she turned back over and over again to smile and wave and thank us. We met Ruthie outside a market in Ginyesi the day before. Having lost the use of her legs as a result of polio, Ruthie has been unable to walk since childhood. Men we met her, she was sitting in a wheelchair that was rusted and tilted heavily to one side. When we asked her if she could move herself in it, she said she was unable to roll in it because the chair would fall apart.

As a standard hospital wheelchair, which is heavy, bulky and not meant for active lifestyles, her original wheelchair had been unable to cope with the rugged terrain of Rwanda and Ruthie had been reduced to begging outside the market as she was left immobile.

We invited Ruthie to come to Butaro and were so excited when she and four others had found their way, traveling over 3 hours to get there. Once fitted with her Rough Rider, it was hard to stop Ruthie from whizzing around the hospital and the look of joy at her newfound mobility and independence was unmistakable on her face.

Butaro hospital is an extraordinary new hospital built by Partners in Health. Walkabout’s visit to Butaro tumed into our busiest day with 12 individuals fitted to their wheelchairs fitted. Our first rider of the day was 11 year old Alfonse. It took us several minutes to establish that Alfonse was indeed 11 as his legs and hips were so twisted from a congenital birth defect that he was the size of an average 6 year old.

Once in his wheelchair Alfonse’s face lit up as he raced around the ward, completely at ease in his chair and happily posing for photos with his mother. Mathias had travelled to Butaro with Ruthie and had also lost the use of his legs from polio. As he was helped out of the bus and made his way to the hospital, he pulled himself along the corridor with his hands, his legs bent up underneath him, and his feet trailing along the floor.

An hour later, having been fitted to his new wheelchair, a smiling Mathias was able to move along that same corridor he had dragged himself down earlier with dignity and ease. Back in Rwinkwavu we had a special invitation to visit Therese at her home in a nearby village. Therese is seventy. She broke her hip and is now unable to walk. She was so excited and grateful to receive a wheelchair that she wanted to thank us by inviting us to her home. We were welcomed with traditional milky Rwandan tea and fresh bananas from the tree outside the front door.

It was fantastic to see her using the wheelchair at home and witnessing first-hand how it had changed her day-to-day life. In the span of just three days the whole family had learned to assist her with her new wheelchair, with her five year old grandson carrying the back and seat cushion and placing them correctly for her to sit on.

This wheelchair distribution would not have been possible without all of your generous contributions. Thanks to your support Benjamin, Vincent, Frank, Solange, Alfonse, Ruthie, Mathias and Therese now have hope for a brighter future. Their new wheelchairs will allow them to become active members of their communities and lead full and independent lives.

“Asante Sana,” thank you for making our mission a reality and for giving our new Rwandan friends a second chance at life. 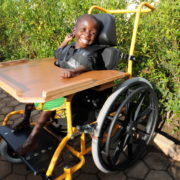 Rwanda 2013
Walkabout In US Congress