In spite of Guinea’s wealth of natural resources, its people are among the poorest in the world, and it ranks at 183 of 188 countries on the Human Development Index.

The influx of refugees from other unstable West African countries combined with the impact of the Ebola outbreak in 2014 and the rampant corruption within the government has meant that an astounding 55% of people live below the poverty line.

The government dedicates just 2-3% of its budget to health and education (while spending 80% on construction projects). This means that many people with disabilities are forced to crawl along the ground to get around, and are some of the most vulnerable in an already struggling population. 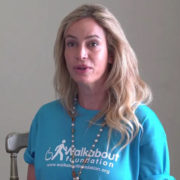